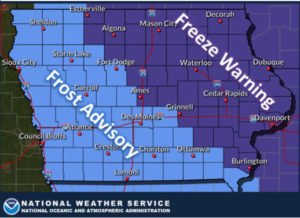 Overnight temperatures are expected to plummet into the 20s and 30s statewide, more on the order of January than May.

National Weather Service meteorologist Brooke Hagenhoff says a Freeze Warning covers Iowa’s northeastern half, with a Frost Advisory posted for all of the southwest.

“The areas under the Freeze Warning are going to be seeing colder temperatures and that hard freeze can be a little harder on plants,” Hagenhoff says. “The areas with the Frost Advisory won’t be quite as cold, a few degrees warmer. Most of the state is going to be very, very cold, especially for this time of year.”

Some communities in northeast Iowa, like Decorah, are expecting lows tonight around 24. Iowans who have blooming plants are advised to haul out those styrofoam cones from the shed, or at least to cover the tender vegetation with a blanket or tarp. “Any plants and crops that are starting to come up that are susceptible to those very cold temperatures, it’s going to be something people will want to keep an eye on,” Hagenhoff says. “If it’s possible to bring them inside, people will want to do that as well.”

Much of the nation’s eastern half is expecting bitter cold, with snow forecast for some areas along the East Coast, kicking off an unseasonably chilly Mother’s Day weekend. “Below normal temperatures are affecting a huge chunk of the country,” Hagenhoff says. “Looking at some of the longer-range models, it looks like we may start to see this pattern break towards the end of next week but that’s still quite a ways off, but it does look like there’s an indication we’ll get back to more spring-like weather here next week.”

Those long-range forecasts show highs in the 60s and 70s in central Iowa by next Thursday.