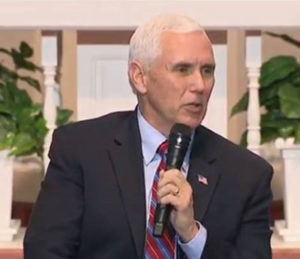 Vice President Mike Pence met with a group of Iowa faith leaders this afternoon to discuss ways to safely resume services inside houses of worship in the midst of a pandemic.

“It’s just been a great encouragement to my heart to see your faith, to see your compassion, to see your resolve,” Pence said, “to hear the concern you have for the members of your communities.”

“The Constitution is not suspended in times of crisis and I promise you we are going to continue to stand by the religious liberty of every American of every faith until this is over and then beyond,” Pence said, to applause. “I promise you.”

Monte Knudson of the Faith Christian Outreach Church in Mount Pleasant and Fairfield plans to reopen Sunday the 17th, with social distancing and “family style” seating.

“These are tough decisions for all of us as leaders knowing that there are risks involved and then seeing so much differences of standards and how people sometimes carry that out,” Knudson said. “I laughed about it when I went to my local Walmart and said there’s a whole lot more people here than gather in my local church…How do we gather people in a way that’s safe?”

Others told Pence they felt called to dispel fear among their congregations.

Pence is due to speak at Hy-Vee headquarters in West Des Moines on a panel later this afternoon on the subject of food security. About 75 Hy-Vee employees have been scattered about a large banquet hall since late this morning, waiting for the event to start.

Pence’s arrival in central Iowa was delayed by more than an hour due to a staffer’s positive coronavirus test. President Trump told reporters at the White House that it was Pence’s press secretary who had tested positive for COVID-19 this morning.

Pence, who is tested daily, was negative this morning, but his departure from Washington was delayed as some of the vice president’s staff who had been around the press secretary were pulled from travel to Iowa.