You are here: Home / Agriculture / Pandemic leaves producers with little to celebrate during ‘Beef Month’ 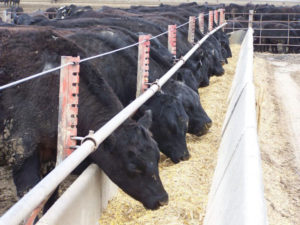 May is recognized is “Beef Month,” and with Memorial Day approaching — it’s also considered the start of the summer grilling season — but the coronavirus pandemic has put a damper on things.

Cattle feeder Craig Anderson of rural Merrill says the slowdown in production at plants has led to a glut of supply and lower prices. “Last week there were cattle trading at a dollar 12 to a dollar 15 a pound. But it was down to about 95 cents,” Anderson says. “..I’m gonna guess that most people have a break-even of about a dollar 25 a pound.”

He says the drop in the prices paid for cattle comes at a time when demand is up among consumers. “There were a lot of cattle that were sold at a loss and probably continue to be sold at a loss. Because of the rush at the meat counter, the retail price has really skyrocketed,” Anderson says.

Anderson says the sale of the prime cuts is really hurt by the slow down in processing and the cut back in the operation of restaurants. “The cattlemen always say — you know people eat hamburger and roast at home — but they go out for a steak,” Anderson says. He says those the prime cuts are now probably ended up in homes in a different form.

“A lot of those prime cuts are being ground up into hamburger right now trying to meet the demand for people trying to maybe feed people at home — and do it on a cheaper basis,” Anderson says.

Anderson estimates the cattle industry is running between 30 and 40 days behind in having cattle marketed on a current basis. He says during that time, cattle may gain around three to four pounds a day, which will add around another 100 to 150 pounds to their market weight.