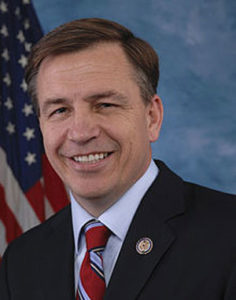 Schilling has not disclosed the type of cancer, but Schilling called the diagnosis tough news and the biggest challenge he’s faced. In a written statement, Schilling said he’s not quitting the race and is confident he’ll “beat this thing and be back at the campaign in very short order.”

Schilling, a former Illinois congressman, is running against state Senator Mariannette Miller-Meeks of Ottumwa in this year’s GOP primary in the second congressional district. Miller-Meeks publicly expressed her well-wishes on Twitter, saying she looks forward to seeing Schilling on the trail again.

Rita Hart, the Democrat running in the second district, also put a statement on Twitter, wishing Schilling a speedy and healthy recovery.

Statements from Schilling, Miller-Meeks and Hart are below.

“My family and I received some tough news this week. I went in for a checkup with my doctor. They noticed some irregularities and performed some tests. Today we got the results we were told to expect: cancer.

“But there’s good news: this is operable. We’re going to fight and we’re going to win. I will be undergoing surgery tomorrow. Please keep me and my family in your prayers during that time.

“As my family and supporters know, I’m a fighter. I’ve been through many challenges in my life, and to be frank, this will be my biggest challenge yet. But I know, with my wife, 10 children, and 13 grandkids behind me, I will be able to overcome this setback. I couldn’t be more prepared.

“I want to assure the voters of the Iowa 2nd District: I’m not quitting. I am confident that we will beat this thing and be back at the campaign in very short order!”

I called @BobbySchilling and left a voicemail to let him know that Curt and I are praying for him and wishing him a speedy recovery. With a loving family at his side, I know he’ll have the support he needs and I look forward to seeing him on the trail again!

So sorry to hear this. Thinking of Bobby, Christie, and all their children and grandchildren today. Best wishes from Paul and me and cheering Bobby on to a speedy and healthy recovery. -RH