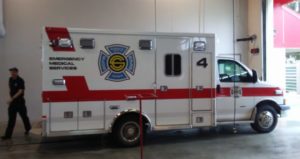 Things are starting to level off for first responders in western Iowa after being busier than normal in the past several weeks with coronavirus related calls.

“We had extra personnel working every day for the last approximately a month to help cover some of the ambulance volume and also to assist in some of the adaptations that we made in our response model,” Aesoph says. ” We are at this point actually backing off on some of those based on the call volumes that we have seen. We are actually planning another reduction June first to go back to our normal staffing levels.”

Sergeant Bluff Fire Chief Anthony Gaul says April was the busiest month in department history. Gaul says part of adapting to the situation was to have the Woodbury County dispatchers get a lot of information for the EMS units. “They are asking people if they have a fever — and if so — what their temperature is, if they have a cough, or if they are short of breath. They are asking the obvious question if they’ve been diagnosed with COVID or been around others that are. They are able to then provide us with the information so we can make the best decisions as we respond,” according to Gaul. ”

He says his department quickly adapted how they use and take care of the equipment. That included creating a smaller equipment package. “So that we don’t take all of our gear into their home and have to decontaminate everything,” he explains. “We chose to put our full isolation kits in a biohazard bag so we have a place to put them when after being done.”

Aesoph says all of the protective measures for people and gear have so far proven successful. “We are fortunate that none of our front-line responders have been diagnosed with COVID-19 to date, despite the numerous calls they have responded to involving potentially or confirmed COVID-type patients,” Aesoph says.

Gaul says there was no playbook in place on how to deal with the COVID-19 pandemic, and that the departments have adjusted and learned as they have dealt with the situation.