You are here: Home / News / Iowa theater chain starting slowly after getting okay to open 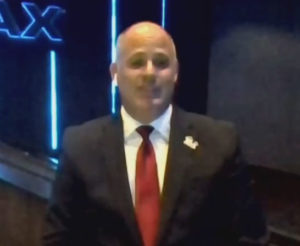 Movie theaters were allowed to reopen this past weekend after being closed since March 17th by the coronavirus pandemic.

Fridley Theaters spokesman Russ Van Orsdel joined the governor Tuesday to talk about his chain’s opening. He says they limited the opening to the five-screen theater in Carrol and the three-plex in Cherokee. With minimal time to promote movie titles and showtimes — attendances was limited — but the guests that visited were excited to get back a little piece of normalcy — and be transported into the world of movies going again,” Van Orsdel says. ” We look forward to re-opening the remainder of out theaters this Friday, May 29th.”

He says they put together a plan and asked guests to take some steps to keep things safe. “Limit groups to a maximum of six people. Accompany and closely supervise children. Utilize credit cards for contactless payment. Practice social distancing in all areas,” he says.

Van Orsdel says they recommend customers wear masks and all employees will wear masks. He says they will use ushers to greet and seat moviegoers so they stay six feet apart. “We’ll schedule show times further apart to keep our lobbies, concession stands, and other common areas free of congestion. This extra time between shows will also allow us to thoroughly clean, disinfect, and sanitize our auditorium,” according to Van Orsdel. He says the movie studies are delaying the new releases, so they will show some classic movies for now.