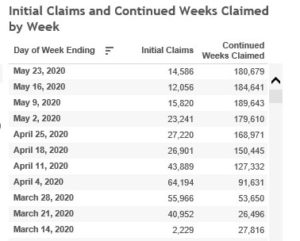 First-time claims were 14,586 which is up around 25,000 from the previous week. It is the first time in three weeks those claims have gone up. Manufacturing saw the most new claims with 3,835. Self-employed and independent contractors filed nearly 2,382 first-time claims.

The number of continuing unemployment claims dropped by around 4,000 for the week to 180,670.  The state paid out nearly $49 million in unemployment benefits last week.