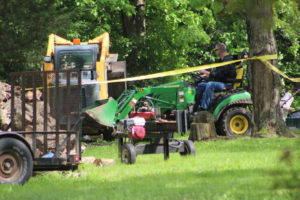 Investigators digging at an Evansdale property.

Authorities spent yesterday digging in a Waterloo suburb, apparently looking for evidence in the month-long search for a missing Arizona man and his step-daughter, who are believed to have been murdered.

The property being searched is at the end of Timber Oak Road, a cul-de-sac, in a quiet Evansdale neighborhood. Officials dressed in white hazmat suits carrying shovels and digging equipment could be seen near a chicken coop on the undeveloped property.

The FBI and officers from several local agencies were involved in the search.

Late Thursday afternoon, police in Chino Valley, Arizona, confirmed the digging was connected to the disappearance of 45-year-old David Batten and 28-year-old Elissa Landry, who have been missing since April 19th. Landry’s boyfriend, 24-year-old 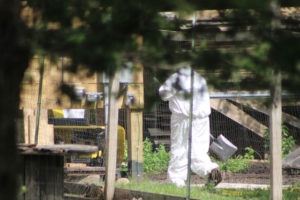 Mitchell Mincks, formerly of Waterloo, is a person of interest in the Arizona homicide case.

On April 28th, he was arrested on unrelated charges at rural Waterloo home. Authorities say two pets belonging to Landry were found in Waterloo last month and her missing vehicle is also believed to be in the Waterloo area.