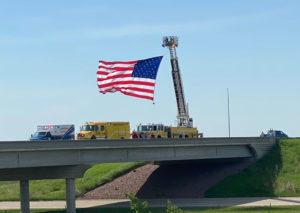 Morning sunshine illuminated the stars and stripes early today as a group of citizen-soldiers from northwest Iowa prepared to head overseas.

Sheldon fire and ambulance crews were set up on top of the Country Club Road overpass above Highway 60 Monday morning to display their appreciation for a Le Mars National Guard Unit that is passing through after having been deployed for active duty.

A massive American flag, which was suspended from the bucket of the Sheldon Fire Company’s aerial ladder truck parked on the overpass, was waving in the wind to wish the guardsmen good luck on their year-long deployment, and to show the support of the Sheldon community. About 80 citizen-soldiers from the 113th Cavalry Troop C departed from Le Mars earlier Monday morning, traveling to Minnesota for training, before being deployed to Africa for approximately a year. 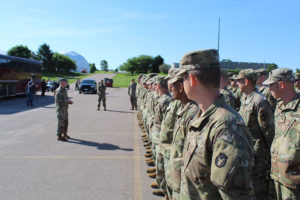 Brigadier General Steve Kremer of the Iowa National Guard spoke during the sendoff ceremony and told the departing soldiers and their families that they probably have a lot of questions wondering if they are ready for this deployment. “You are thinking about things you’re going to miss. You are worried about what happens when something at home breaks. You are wondering who is going to shovel the snow when you are gone this winter. Who is going to be there for my family when they need help,” Kremer says. “These are normal thoughts. Apprehension is a normal part of the process.”

General Kremer then tried to offer some reassurance to the soldiers about their year-long mission. “Each and every one of you plays a critical role in the mission. You are well led, well trained and well equipped. And I’m confident you will do an outstanding job. We would not have sent you out the door if you were not ready to do the mission you have been assigned,” according to Kremer.

He also emphasized that the family members staying behind will be supported by the Iowa National Guard. “We have outstanding community support and volunteers ready to support the families in need. Your families will not be alone — help is only a call away,” Kremer says, “We will take care of your families so that you can stay focused on the mission and the work at hand.”

Le Mars mayor Dick Kirchoff also addressed the troops and wished them well on their deployment mission. Kirchoff reminded the local guard unit that all of Le Mars stand behind the unit and the mission.