You are here: Home / News / Iowa’s governor says National Guard ready, not needed at this time 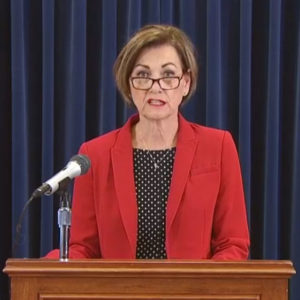 Governor Kim Reynolds today said the Iowa National Guard is “potentially” part of the state’s response to rioting and property destruction, but the governor indicated Guard soldiers are not needed at this time.

“They are ready at a moment’s notice to be deployed and it would be to support what is already taking place,” Reynolds said during a statehouse news conference. “…It would help us maybe secure some facilities if that became an issue.”

President Trump has said he will send the U.S. military into states which are not controlling rioters. Reynolds said there has been “incredible collaboration” among city, county and state law enforcement agencies and they’ve been able to mobilize enough resources.

“They have done an incredible and professional job of standing on the front line, doing everything that they can to facilitate peaceful protests,” Reynolds said, “but also to be prepared and ready when we have agitators and individuals that have a different agenda, that want to put Iowans’ lives at risk and want to destroy properties and our communities.” 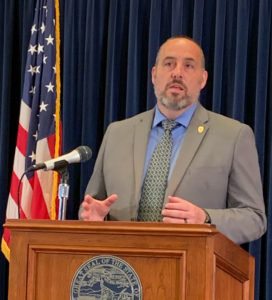 “We were experiencing yesterday a fair amount of calculated, intentional activity by a small group of folks that were organized,” Bayens said, “and they were using very specific tactics.”

The decision to use pepper spray, rubber bullets and tear gas to get crowds to disperse is not done in a vacuum, Bayens said during the governor’s news conference.

“We are extremely reluctant to take those actions,” Bayens said. “I can tell you honestly the Iowa State Patrol last night and the tactical teams that were out in combination with the Story County Sheriff’s Office — it was restraint, restraint, restraint.”

According to Bayens, surveillance inside the crowd, intelligence information and social media posts indicated after five orders to leave the capitol grounds were not followed and it was time for use of force at 11:30 p.m.