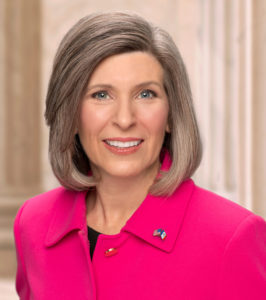 There’s been a debate about whether to change the names of military bases that were named after former Confederate soldiers because of their link to slavery.

Iowa Senator Joni Ernst, is an Army veteran on the Armed Services Committee, and says she’s happy to have the conversation.
“It is something that has been brought up through our National Defense Authorization Act. And this provision passed almost unanimously in our committee,” Ernst says.

Ernst, a Republican from Red Oak, says she supports the action that is being taken. “What we’re promoting is the establishment of a commission that’s bipartisan that would take a look at these installation names — work on new names replacing these names — working with local authorities,” Ernst says. “Finding a path forward, so at some point we can really begin to heal some of the racial injustice that we are feeling across the country right now.”

President Donald Trump is opposed to the idea of renaming any of the ten bases named after Confederate soldiers. “There will be opposition to it — but again– it is a discussion that we absolutely need to have,” she says.

Statues of Confederate soldiers have been torn down or vandalized in some cities, and a statue of Columbus was pulled down in Minneapolis because of the perceived link to racial injustice. Ernst says violence and destruction is not the way to handle things

.”I don’t think it is appropriate in any situation. If there are statues that the public feels with the authorities in charge of those monuments,” according to Ernst. Ernst says bringing the nation together should be done through “healthy, constructive discussions” and not through violence.