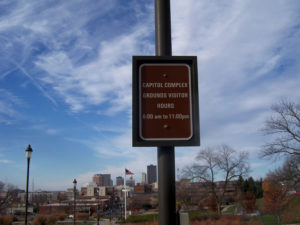 The group held a rally at the statehouse on the 4th of July. Christine Nobiss spoke in front of a statue that’s described by a state website as a pioneer man and his son being guided by a “friendly Indian.”

“This is not the story of this state. We did not have friendly Indians showing the way to people. We had settler invaders and colonial militias come into this state and murder their way across this country,” she said. “This land is stolen land.”

The group also wants the state to remove a Christopher Columbus memorial outside the capital. They delivered a letter to lawmakers that also mentions removal of a mural inside the capitol building that depicts westward expansion. Kelly Buffalo-Quinn said she thinks the Iowa Capitol is one of the most beautiful statehouses in the country, but it’s marred by what she calls these symbols of “white supremacy.”

“There are better ways to depict every person within the state of Iowa, especially seeing as how this is Native land,” she said at the 4th of July rally, “the Meskwaki, the Ioway and the Lakota.”

Counter-protesters gathered near the Columbus statue, but the two competing events ended without violence. The organizer of the counter protest said it was about standing up for the rule of law and not succumbing to mob rule.