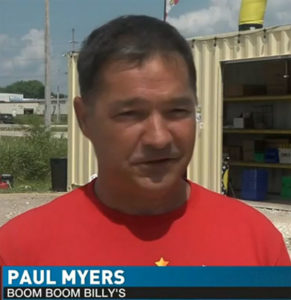 The owners of fireworks stores say it was a big year for sales after many cities canceled their public shows on the Fourth of July.

The owner of Boom Boom Billy’s in Marion, Paul Myers, told KCRG TV he has not gone through all the numbers yet, but he believes sales were up about 20 percent compared to previous years. He said they bought extra inventory this year in anticipation of more demand.

“People want to celebrate the Fourth of July with fireworks,” Myers says. “And unfortunately since we couldn’t do it with the Freedom Festival, a lot of people did it in their backyard. And at least here in Marion, that’s legal. And then out in the county that’s legal. I’m happy that we were able to help people out with that.”

Myers says temporary fireworks stands can operate until July 8th but he says many will close before then. Fireworks tents set up in towns like Shueyville, North Liberty, and Coralville, have already emptied their tents and closed.

The number of fireworks complaints to police is also an indication that more people were putting on their own shows. A spokesman for the Des Moines Police Department says they received almost 2,000 complaints in the last five weeks, compared to less than 200 last year. Eighty percent of the complaints came on the 4th.

Sioux City Police responded to 79 complaints related to fireworks. Sioux City allows people to set off fireworks from private property for a limited time – – including the 3rd and 4th of July. Some police officers are assigned to actively look for fireworks violations. But Lieutenant Chris Groves says it can be a tough ordinance to enforce.

“Somebody calls and says that ‘Citizen X is lighting these fireworks off in the street’ and when we get there, they’re not on the street. Maybe they’re in their driveway or on their own property. Essentially they weren’t out on the street, and there may even be remnants of fireworks in the street. But I can’t prove necessarily it was them or anybody else,” Groves says.

Iowa law changed to allow the sale and use of fireworks in 2017.  Local governments decide the regulations for their community.

(Katie Piekes of Iowa Public Radio contributed to this story)