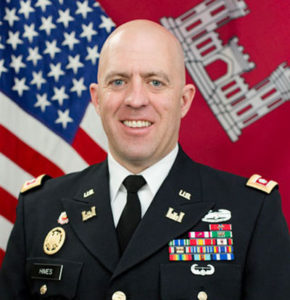 The Omaha District of the U.S. Army Corps of Engineers has a new commander.

Command was officially passed Wednesday from outgoing Colonel John Hudson to incoming Colonel Mark Himes. Hudson has been commander of the Corps’ Omaha District — which oversees the Missouri River from northern-Missouri to its headwaters — since 2017.

In his farewell speech, Hudson recalled the devastating floods that engulfed the river’s lower basin in 2019, causing an estimated two-point-nine billion in damage. “The melting waters quickly overwhelmed every tributary in eastern Nebraska, western Iowa and southeastern South Dakota,” Hudson says. “Within 72 hours, nearly every levee system from Omaha to Kansas City had been overtopped and most had breached. In total, more than 300 miles of district levees were damaged or destroyed.”

Work continues on repairing additional levees that were damaged from the flooding and the Corps has spent more than $300 million on repairs. Hudson says he will be retiring from the Army after 26 years.

Himes comes to the Omaha District after most recently studying at the U.S. Army War College in Carlisle, Pennsylvania. He has served in various roles for the Corps, including as deputy commander of the Jacksonville, Florida District. “The history and accomplishments of the Omaha District are unmatched,” Himes says. “From the earliest Civil Works missions to manage the Missouri River, the construction of the six mainstream dam projects, the countless military program successes like building the NORAD Command Center deep inside Cheyenne Mountain or the many military facilities throughout the upper Midwest to protect the nation and enable soldiers, airmen and civilians to carry out their missions.”

Himes says he is thankful to have landed in Omaha for his first command position. “It’s an extraordinary privilege and honor to assume command of this mighty district. I’m so thankful to join the dedicated team of professionals that make up this first-class organization,” according to Himes. “I look forward to serving with you as we tackle the nation’s toughest engineering challenges.”

The Omaha District oversees an annual budget of around one billion dollars in construction programs in parts of seven states throughout the Midwest.