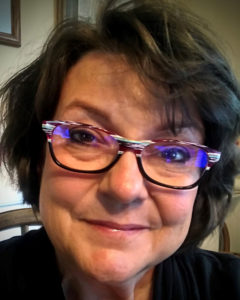 A woman who’s been the Iowa Department of Public Health’s lead spokesperson for more than a decade has been forced out of the post.

Polly Carver-Kimm said she believes she’s a casualty of the pressure the department’s been under in the midst of the pandemic and, as a former journalist, she sought to be an advocate for openness and timely responses.

“I felt that maybe that was part of the reason why I was let go because, you know, we kind of closed up a little bit,” Carver-Kimm said in an interview.

Her dismissal was not a surprise.

“I have sensed that something was coming for several months now because I was just consistently relieved of duties and it started back in March not long after we had our first case of COVID-19,” Carver-Kimm said, “and at that time then I was told that I wouldn’t be handling media inquiries anymore.”

Carver-Kimm indicated her other job duties that related to COVID-19 were gradually eliminated, then, about a month ago, Carver-Kimm was removed from her role as the officer in the agency who fulfilled public records requests from the media.

She said the department’s director, who is leaving his job July 31, called her earlier today and gave her the choice to resign or be terminated.

“I asked why,” Carver-Kimm said, “and he said they were doing a restructuring and that was all he offered.”

Carver-Kimm said the past few months have been a trying period for the agency.

“All the people who work at IDPH have the best interests of the health of Iowans in mind. This is a situation that it’s no surprise to anyone that’s become a political football, too, and so all of the media is vetting by the governor’s office,” Carver-Kimm said.

Carver-Kimm is married to Radio Iowa sports director Todd Kimm. She was a long-time reporter and morning talk show host at a Des Moines radio station before she was hired to work in the public health department in 2007.

“We can share the following: Transparency is critical in our response to the COVID-19 pandemic,” McCoy said. “The Iowa Department of Public Health has gone above and beyond to provide up-to-date and comprehensive information throughout the pandemic. These efforts have included participating in regular press briefings, constant communication with media and continuous improvement on how we report data and provide information. We value the role media plays in the state’s efforts to get information to the public, and intend to continue a strong partnership.”

(This post was updated at 7:30 a.m. with additional information.)