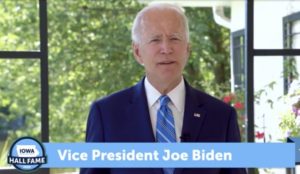 The Democratic Party’s presumptive nominee for president is describing Iowa as a swing state that may be vital to an Electoral College victory this fall. Joe Biden delivered a short message to Iowa Democrats during the party’s virtual fundraiser early this evening.

“Iowa’s a critical battleground state for our campaign,” Biden said. “We’re going to do everything we can to make sure Democrats win up and down the ballot all across Iowa this November.”

“You know, we have to do more than just beat Trump. We have to keep the House of Representatives and win back the United States Senate,” Biden said. “We have to lead and deliver meaningful change for the millions of people who are hurting all across this nation. That means we need strong state parties, strong county parties, strong Democratic Party organizations at all levels.”

Iowa Democratic Party chairman Mark Smith, in his recorded remarks, said the nation is at a turning point.

“During these difficult times, Democratic leaders who listen and understand Americans have never been needed more badly than now,” Smith said.

The Iowa Democratic Party’s virtual fundraiser lasted just about an hour. It featured recorded remarks from party leaders as well as Democratic activists who were honored with eight different awards. Iowa Republican Party chairman Jeff Kaufmann blasted the event, saying it shows the only way for Iowans to see Biden is “to pay for access” and buy a ticket to a fundraiser.