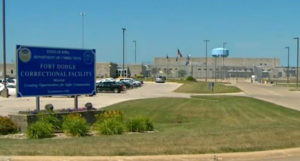 The Iowa Department of Corrections website indicates a third inmate from the state prison in Fort Dodge has died after contracting COVID-19.

During the month of July, 336 inmates and 30 members of the staff at the Fort Dodge prison have tested positive for the virus. The Iowa Department of Correction’s website indicates about half the staff and all but 59 inmates have recovered.

Forty-eight-year-old inmate Timothy McGhee, Jr., began serving a 15-year sentence on three theft convictions in October of 2018. He died Monday night at the University of Iowa Hospital. According to a news release from the department, McGhee had “multiple pre-existing medical conditions” and his death is “likely” due to complications of COVID-19.

The agency’s website shows nine staff members who work at three other state prisons have tested positive for COVID-19. Two work at the state prison in Anamosa, five work at the in-take facility in Coralville and the other two staffers who have the virus work at the women’s prison in Mitchellville. None of the inmates at those three facilities are currently listed as COVID positive.