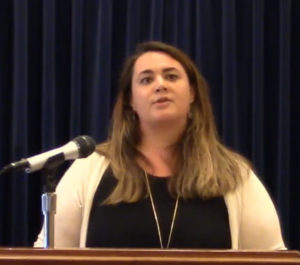 The state medical director whose public profile has been elevated during the pandemic has gotten a big pay boost.

Pedati has been the state epidemiologist as well as the state medical director since late 2018. Pedati’s new salary of $265,044 is about $24,000 higher than that of Dr. Patricia Quinlisk, her predecessor who retired nearly two years ago after 24 years in the job. Garcia said she’s “quite comfortable” with Pedati’s current salary compared to what other physicians in state government are making.

The Bleeding Heartland blog first reported Pedati’s salary adjustment, as well as $55,000 in overtime pay to Pedati for work this spring. Garcia said Pedati is not only being asked to be the state’s top clinician, she’s had to do her work “in the spotlight and under a microscope” during the pandemic.

“She’s worked at the CDC,” Garcia said. “She’s worked in another state and she is paramount to our ability to sustain this response over the course of the next year.”

Pedati worked in the Nebraska Department of Health and Human Services before taking the job in Iowa’s Department of Public Health.