You are here: Home / News / Numbers show a warmer and dry July 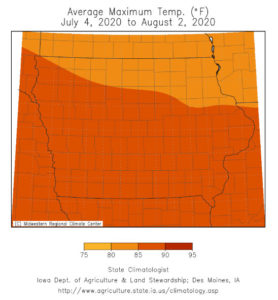 With low temperatures this morning in the 40s and 50s across Iowa, it’s becoming clear that August could contain a radical shift from the extreme heat of July.

State climatologist Justin Glisan says July wrapped up on Friday being much warmer and drier than normal. “Typically, we expect the temperature to be around 74 degrees, the average temperature for the state, and it’s looking like anywhere from two to three degrees above average, depending on where you are in the state,” Glisan says. “In terms of precipitation, the story of the month is drought conditions creeping into western Iowa.”

The latest surveys show more than half of Iowa is either in drought already or has very dry conditions, with the worst areas being in western Iowa and moving eastward. “Typically, we expect four-and-a-half inches of rainfall across the state and there are parts of the state that only received 25% of what they normally would get in July,” Glisan says. “There are pockets in west-central Iowa that are anywhere from three to four inches below average.”

Coming out of the hotter, drier July, Glisan says August promises to be a cooler, wetter month. “That would be an absolute gift for our drought region. We have 22 counties that are currently in D-2 drought, which is severe drought,” Glisan says. “Cooler temperatures and more rainfall would help mitigate any kind of crop stress that we’re seeing out there but it would also help improve the drought conditions that we’re seeing.”

High temperatures for the week ahead are expected to be in the 70s and low 80s with mostly dry conditions in the forecast.