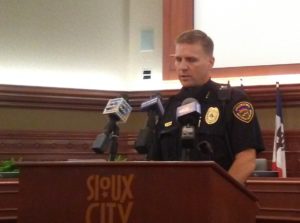 The city council in Sioux City will hear a proposal to purchase body cameras for officers at their meeting tonight.

Police Chief Rex Mueller says the plan is to purchase enough cameras to equip all line officers and detectives with cameras.
He says it will allow for accurate documentation of arrests, critical incidents, and contact with the public. The chief says they will also help with the accuracy of reports and evidence in cases. The cameras will cost around 261-thousand dollars, and Mayor Bob Scott suggests that money should come from traffic camera revenue. Scott says there is excess camera money and it is supposed to be used for public safety.

Chief Mueller and Scott have both previously expressed their support for officers wearing the body cameras. A petition drive was started by the public asking for the cameras after the death of George Floyd while in police custody in Minneapolis. Local NAACP president, Ike Rayford, supports having the cameras.

“We feel there’s a protection on both sides. We feel that one, we want the citizens to feel safe and be safe. But we do understand the police officers, they want to be protected, and as I have often said — Sioux City is a different place — and we have not had the problems that they have had in other places. This is a step, this is a spoke in the wheel,” Rayford says.

Mayor Scott says he believes the city council will support the camera request. If approved, the police hope to have the cameras in use by late fall.
(Story and photo by Woody Gottburg, KSCJ, Sioux City)