You are here: Home / Fires/Accidents/Disasters / Some counties move into extreme drought category 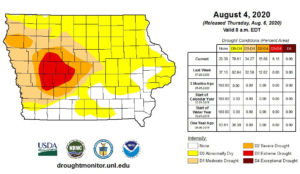 While scattered showers are in the forecast for much of Iowa over the next several days, dry conditions have worsened.

The latest report from the U.S. Drought Monitor shows all or parts of 11 counties in west-central Iowa are now in the D-3 category, which means extreme drought. Last week, no Iowa counties were in D-3.

The scale only goes up to D-4, which is exceptional drought, though none of Iowa has reached that level yet this year. The new report shows much of Iowa’s western half is under moderate or severe drought, while much of northern and east-central Iowa is considered abnormally dry.

Only about 20 counties, on the southern and far eastern borders are in normal territory.