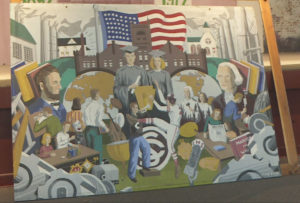 This mural from the former Central High School is going to the Sioux City Museum.

One of the last remaining murals from the historic former Central High School building in Sioux City is headed to the Sioux City Public Museum.

The Sioux City History website says the building cost more than $100,000 when it was built and featured the modern amenities of thermostat-controlled heating and electric bells that were not yet common in buildings. The school was closed in 1972 and “The Castle on the Hill Association” was formed to find a new use for the building by restoring and renovating it. It is now an apartment complex.

Hansen says the mural will be inspected and he hopes to have it on display sometime in the future. He says they will have to look at it once it gets to the museum and see if it needs any work done on it before finding a way to display the mural.

Hansen says there is a lot of history pictured in the mural — including portraits of former presidents and scenes of daily life at the old high school. The school was listed on the National Register of Historic Places in 1973.