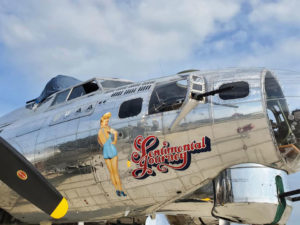 The B-17 Bomber “Sentimental Journey” and the P-51 Mustang “Tuskegee Airmen” are both at the Mason City Municipal Airport this weekend.

The bomber is owned by the Arizona Commemorative Air Force Museum and is flying through the Midwest as part of their “Flying Legends of Victory Tour”. Senior pilot Chris Schaich says the B-17 was the premiere strategic bomber at the start of World War II and was very instrumental in helping the United States win the war.

“It was produced in such mass numbers, it was really one of the strong airplanes of the war. Today, out of all the 12,000 or more made, there’s only nine that are flyable, and really four that actually touring like we are.” Schaich says what makes it really special is that it’s a flying museum that allows people to come out and tour the airplane inside and out.

“We haven’t changed it from 1940. It sounds and smells and behaves just like it did then, so you’re really getting to experience history like it was when the airplane came out,” he says. Schaich says it’s an honor to be flying the plane around the country, especially when veterans come to see it. 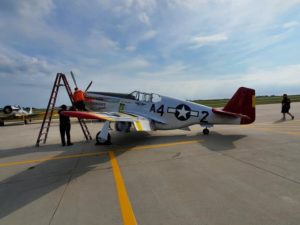 “It represents all the airmen who flew it before us, the generation of World War Two vets. Anybody who touched the airplane, it represents their effort in the war. For me it’s an honor to be able to do that, come out here, fly the airplane, bring it to the public, show it to the vets,” Schaich says, “We get a lot of families come out and they bring their veteran family member. Sometimes you get a moment of silence from the veteran as they remember things, other times they open up and tell stories that the family says they’ve never heard. It’s kind of a magical airplane, it brings all kinds of emotions, and families come out and can interact with veterans. It’s actually very special.”

Ground tours will take place with it costing $10 per person or $20 for a family of four. To take a ride in the bomber, it’s $425 to sit in a compartment seat, and $850 to sit in the bombardier compartment. For the ride in the P-51-C Mustang jump seat, it costs $1,995. For more information, you can go to the Arizona Commemorative Air Force Museum’s website .