You are here: Home / Fires/Accidents/Disasters / Derecho cuts a path of damage from west to east across state 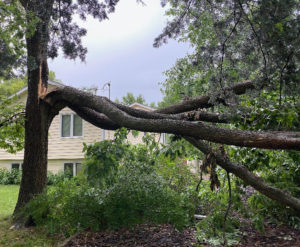 A storm packing big winds left a lot of the state without power today. National Weather Service meteorlogist Jeff Zogg, says it was a derecho.

“And that is a line of severe storms that produces widespread damaging winds as we saw across much of central Iowa. Also, derechos tend to move very fast — speeds in excess of 60 miles-an-hour or so when they move through — so, they are fast-moving storms that produce widespread severe damage,” Zogg says.

This storm got going before the noon hour and made its way across the state.
“It originated in west-central and northwest Iowa. Then moved across central Iowa into eastern Iowa and then into northern Illinois,” according to Zogg.

Winds were reported as high as 100 miles-an-hour and they knocked down trees,  blew over vehicles, and left thousands without power. He says there was a lot of tree damage, roof damage and that sort of thing. Zogg says there were some reports of hail and lots of rain with this storm.

“Generally amounts of a half inch to an inch went it moved through, so it fell pretty fast, pretty intense wind-drive rain as it moved through,” Zogg says. He says derecho doesn’t happen that often — but they leave an impression.
“This part of the country we ususally get about one a year. They are not that commone — but when they do occur — they usually produce widespread, damaging winds,” Zogg says.

At one point an estimated 450,000 people were without power across the state.

The Iowa DOT warned that many roads, highways and interstates are impassable. Interstate 35 is closed in both directions from Ames to Alleman. Interstate 680 is closed from Iowa City to Cedar Rapids. The DOT says the roads are littered with overturned and damaged vehicles as well as other debris. Electronic sign boards that normally alert motorists to problems are also out in many of those areas.