You are here: Home / Fires/Accidents/Disasters / Thousands remain without power, but crews making progress 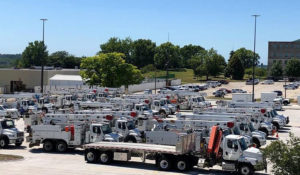 Utility trucks at the state capitol complex preparing for assignemnts.

More than a quarter million Iowans are still without power, nearly three days after a major wind storm blasted across the state.

Alliant Energy spokeswoman Cindy Tomlinson says the situation remains too complex for an accurate estimate of a restoration time. “We don’t want to over-promise and then under-deliver,” Tomlinson says. “We want to make sure when we provide an estimated time that we can meet that window. It’s just going to take a little more time to estimate when services will be restored.”

Reports show 251,000 Iowa homes remain without electricity, though at the peak after the Monday severe weather, nearly 500,000 customers were in the dark. Tomlinson says when Alliant’s senior vice president Terry Kouba toured the damage in Marshalltown and Cedar Rapids, he was amazed.

“The storm has created damage beyond what we’ve ever seen before and he’s been with our company several decades,” she says. “It’s definitely an experience beyond what he’s ever seen before.” Tomlinson reminds folks who are using generators to be sure and shut down the main disconnect to the house. If that is still on, it could result in electricity feeding back down the line and could potentially injure a utility worker who’s trying to get your power back on.

MidAmerican Energy spokesman Geoff Greenwood says most customers should get their power back today, but for some others, it could take as long as Saturday. “We started with the really big lines and we’re working to the smaller distribution lines and neighborhoods, and eventually to each customer individually,” Greenwood. “It just takes a lot of time because of all the damage that’s been done. It simply takes time.”

Greenwood says damage from Monday’s storm is so severe in some of its service areas that there’s a lot of work to do before the power can come back on. “In some cases, we have to wait for tree crews to remove downed trees from lines before we can begin the line work,” he says. “That’s why we’ve called in additional tree crews as well. They’re just as important as line crews.”

Alliant’s Tomlinson reminds everyone to continue to avoid downed power lines, because you never know if maybe a generator may be feeding back into those lines, or when the power DOES come back on. At last report, MidAmerican had about 72,000 customers without power, while Alliant had 149-thousand customers without.