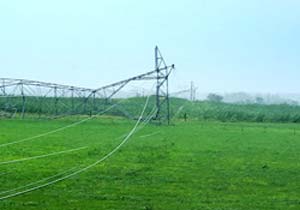 Utility officials say more than 99% of Iowans have their power restored after the derecho blasted across the state 15 days ago.

For some, the cost of hiring an electrician to repair the damage is a barrier to getting the lights back on. Under a new program called Project ReConnect, hundreds of thousands of dollars are available for Iowans who can’t afford to have their meter box or weatherhead fixed, work that must be done before power is restored.

Kristin Roberts leads the United Way of East Central Iowa. “We know the derecho has had a great impact on those families who live on the edge of being financially stable,” Roberts says. “In addition to the stress, the expenses of having to reattach the electrical box or mast to a home could be the difference between a family remaining financially secure or not.” The program is a collaboration between Alliant Energy, the United Way, and other social service groups.

Officials in hard-hit Cedar Rapids say they’re transitioning from the initial disaster response phase to long-term recovery. Cedar Rapids Fire Chief Greg Smith announced Monday the city’s nightly curfew has been lifted. “Electrical power has been restored to nearly all customers in Cedar Rapids and so the curfew is no longer needed,” Smith says. “We ask citizens to continue to be vigilant during the evening and overnight hours when it is difficult to see debris on sidewalks and roadways.”

While the power is back to nearly all Iowans, many thousands are still waiting for internet service to be restored. Even for those with power, not every problem was solved when the electricity came back on. Pat D’Alessandro, a volunteer with the Red Cross, says the greatest need in the Quad Cities is food.

“You might be able to save things in your freezer for a day or two as long as you don’t open it up,” D’Allesandro says. “Your refrigerator isn’t good after about four hours and a lot of people were without power for much longer than that.” The last major power outage in the winter wasn’t as severe, she says, but as temperatures rise, it gets harder to preserve food. And as unemployment rises, it gets harder to replace it. Those who want to help and those who need it are encouraged to call 1-800-Red-Cross.