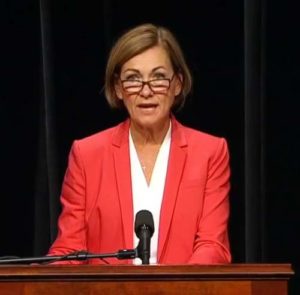 Governor Kim Reynolds says she cannot confirm what the Trump Administration may be planning to announce regarding oil company waivers from ethanol blending requirements.

During a stop in Atlantic this afternoon, Reynolds said she saw the Reuters report on Tuesday evening that indicated Trump has directed the EPA to deny waivers the oil industry requested in previous years.

The EPA has yet to announce its decision on dozens of oil industry requests to be excused from the federal mandate that a certain amount of ethanol be blended into gasoline each year. These so-called “gap year” waivers date back to 2011. The oil industry just filed a request for the U.S. Supreme Court to review a circuit court decision that the EPA has failed to follow federal law when granting past waivers.

There’s also a separate batch of ethanol waivers for 2019 and 2020 and Reuters reporting does not indicate the president’s rumored directive would apply to those.