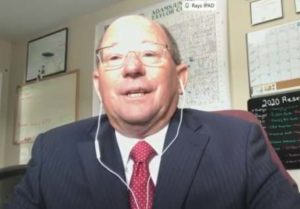 A Corning farmer testified before Congress today that a Trump Administration rule that changes the definition of federally protected waterways offers clarity for the nation’s farmers.

Ray Gaesser farms corn and soybeans with his son Chris near Corning. Speaking before the Senate Environment and Public Works Committee, Gaesser says the previous rule was overreaching, defining land where water flowed after a rain as federally regulated.

“The EPA wrote a rule that threatened my farm with jaw-dropping penalties and even criminal prosecution for tilling, spraying, or disturbing a Water of the U.S.” This spring, President Trump and the Environmental Protection Agency finalized the Navigable Waters Protection Rule.

The new rule replaces the Obama-era Waters of the U.S. rule in the Clean Water Act and changes the definition of what qualifies as a Water of the U.S. Implemented in 2015, WOTUS was developed to address issues over clarity with federal waterways. Following years of court battles, the Trump Administration suspended the rule in September 2019 and implemented a new rule this spring.

Gaesser says the new rule allows flexibility for farmers to manage conservation on their land. “Our landscapes are diverse, so there is no perfect model,” said Gaesser. “Instead, we need the ability to make the best decisions possible to successfully manage and mitigate what’s out of our control.”

Gaesser says farmers and ranchers care about having clean water and preserving their land because it is how they feed their family and the nation. “This rule brings certainty and predictability into focus, giving farmers like me and my son Chris the freedom to farm all while achieving important regulatory oversight,” said Gaesser. “This new rule does not change who oversees permanent waterways. Instead, it ensures states can enforce their own environmental laws to position farmers and rural communities for long-term success.”

The new rule defines federal waterways as territorial seas and traditional navigable waters, perennial and intermittent tributaries, certain lakes, ponds and impoundments, and wetlands that are adjacent to jurisdictional waters. The act also spells out that rainfall, groundwater, and roadside ditches are not subject to federal control.