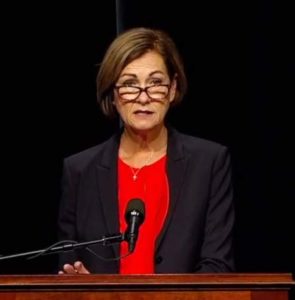 Republican Governor Kim Reynolds is defending her decision to use federal coronavirus relief money to cover the salaries of 21 members of her staff.

“CARES (Act) money can be used for salaries,” Reynolds said during a news conference Wednesday. “That’s very clear in what allowable allocations are.”

Some Democrats in the Iowa Senate have called for an investigation of the decision after the Bleeding Heartland blog first raised questions about the spending. Reynolds said federal guidance indicates CARES Act money may be used for expenses directly related to the pandemic. According to the governor, the roles for her staff immediately changed once Covid cases were confirmed in Iowa in early March.

“I moved the entire team out to the state Emergency Operations Center…to have everybody…hearing and seeing the same information,” Reynolds said, “communicating, collaborating, putting a system together.”

The salaries of some but not all of the governor’s staff are covered with money from other state agency budgets and Reynolds told reporters she felt those agencies shouldn’t shoulder the costs of those salaries if the staff worked on the state’s Covid response rather than on matters related to the agency.

A Democrat in the state senate says the state’s share of federal Covid relief money should be spent to help Iowans who’ve lost their job or are trying to keep their business afloat rather than pay state employees. Reynolds said her staff worked overtime to respond to the pandemic. Half were assigned to policy-related tasks. The other half were assigned to answer phone calls and emails from Iowans seeking information.

“So I have absolutely no problem submitting the $300,000 for the additional expense in salaries in our office,” Reynolds said.

The governor’s chief of staff indicated Reynolds has not formally signed off on the federal money transfer yet. The state legislature set aside more than $4.5 million in the state budget for the governor’s office operations and the governor has broad authority to distribute that money as she sees fit. The only salaries which are specified in state law are those for the governor and lieutenant governor.