You are here: Home / News / Beebeetown burger named best in Iowa this year 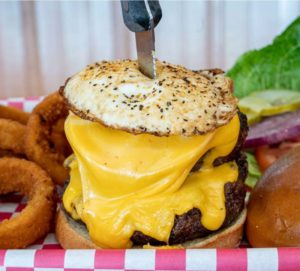 The Breakfast Burger at the Twisted Tail.

Burgers served at a restaurant in west-central Iowa were named today as “Iowa’s Best Burger.”

Hannah Johnson manages the “Twisted Tail” restaurant in Beebeetown owned by her parents, Ed and Ruth Spencer. “We were pretty excited and honored. We raise cattle for a living and have a real estate and auction business, plus this, and we were pretty honored because we take a lot of pride in serving the best beef,” Johnson says.

She manages the restaurant with her brother Luke, who came up with one of their popular offerings known as the breakfast burger. “It has bacon, Canadian bacon, and then there’s an egg on it that’s over easy and some cheese,” Johnson explains. “When we first opened he did some experimenting and that’s been a famous burger. The newst one is the Beebeetown White Gold. There’s kind of a story about gold in Beebeetown — so we came up with the Beebeetown White Gold — its got the white cheddar and black forest bacon and the braised onions.”

Johnson says they didn’t have any restaurant experience when her parents bought an old restaurant and refurbished it. “We grew up in Beebeetown and so my parents the owners, they actually live in one of the original Beebeetown houses. So, there’s lots of history in Beebeetown, and so when it came up for sale my dad just basically said ‘build it and they will come’,” according to Johnson.

They have also gotten notice for their ribs — which won first prize in the 2013 Iowa State Fair Farm Bureau Cookoff. The restaurant went to take out service during the pandemic shutdown and stayed that way two weeks after things opened back up. Johnson says they reconfigured some of the seating to meet social distancing requirements and are open for sit down service again. She says the customers have come back.

Johnson says it’s a good place to go for a burger. “Beebeetown Iowa, the middle of nowhere and close to everywhere,” she says.
Beebeetown is located nine miles from Missouri Valley, nine miles from Logan, ten miles from Neola, and 16 miles from Council Bluffs. You can find it off exit eight on I-880. They are open Wednesday through Sunday from 11 a.m. until 9 p.m.

This is the 11th year for the annual Best Burger contest sponsored by the Iowa Beef Industry Council.