You are here: Home / News / U.S. Rep. Steve King says his book to be released within weeks 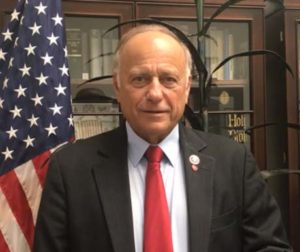 “It is due to be published,” King says. “We don’t have the hard date, but within weeks.”

King says he’s been keeping notes for years and started writing in earnest in June. After 18 years in the U.S. House, Primary voters chose Randy Feenstra rather than King to be the GOP nominee for Iowa’s fourth district congressional seat.

“Couldn’t find the uninterrupted time to do it until after the Primary,” King says, “and then I sat down and I’d be out there when the sun would come up in the morning and I would just write and the rest of the world would wake up after a while and start to interrupt that and when I could no longer produce something, I’d just stop and start the next day.”

The title of King’s book is “Walk Through the Fire” and King says it was inspired by the late Andrew Breitbart.

“Andrew would say: ‘Walk towards the fire. Their bullets aren’t real…Have the courage to do that because they want to shut you up and they want to diminish your message by calling you names,'” King says, “so I start the book out by using that narrative, but then the title of the book is ‘Walk Through the Fire,’ because I didn’t get to stop at the fire. I had to walk through the fire.”

King was a stalwart opponent of immigration reform efforts in Congress, which he called amnesty. King says his book will correct the record about his career and address the attacks he’s endured from critics who called him a racist and a xenophobe.

Once his 9th term in the U.S. House is over at year’s end, King says he’s planning to establish an international organization to restore western civilization.

“I can see that our civilization is under assault and it starts with our churches being turned into museums and the secularization of our society,” King says. “It started in Europe and it’s washed over into this country.”

King, who is 71 years old, was born in Storm Lake and graduated from Denison High School. He and his wife live on a farm near Kiron. King owned a construction company when he was first elected to the Iowa Senate in 1996. He was elected to the U.S. House in 2002.