You are here: Home / News / Saturday project in Spencer to document graves of Civil War veterans 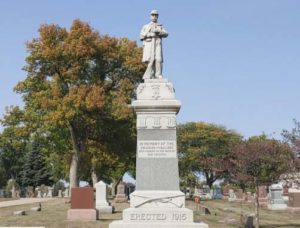 Volunteers are invited on Saturday to help restore and catalog the condition of grave markers a Spencer cemetery that are more than a century old.

“They came out here, having survived a horrific war,” she says. “They homesteaded, they came for business purposes — a variety of reasons, but they made their lives and spent the remainder of their lives in Clay County and Spencer.”

The City of Spencer was incorporated 15 years after the Civil War ended. Five veterans of that war are buried in graves in Spencer that are arranged in a semi-circle at the cemetery’s west gate. Volunteers are needed to search out monuments and gravestones for other Civil War era veterans in the cemetery and document the condition of the markers.

“Some of the stones out there look like they were put down last week,” Oechslin says. “Others are practically illegible and have damage.”

The Iowa Sons of Union Civil War Veterans has the authority to replace stones. The volunteer project at Spencer’s Riverside cemetery will start at 1 p.m. and at 3 p.m. there will be a re-dedication ceremony for the Civil War statue in the cemetery that was originally placed there in 1915.