You are here: Home / News / One dead, 11 injured in Waterloo shooting 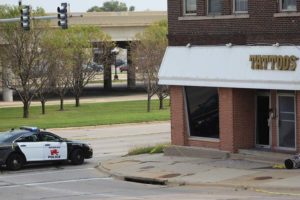 A mass shooting in Waterloo over the weekend left one person dead and nearly a dozen others injured.

The incident happened Saturday around 3:15 a.m. at a former downtown nightclub that’s been closed for several years. Waterloo Police Chief Joel Fitzgerald said charges are pending against the owners who leased the building, as it was not authorized to be an after-hours club.

“We have a shooting on our hands of some significant proportion,” Fitzgerald said. “We do know that gunfire was exchanged inside this location. It was not a nightclub. It was not authorized to be a place where people gather in that sort of size.”

The chief says of the 11 people who were injured, eight were hit with bullets. Fitzgerald didn’t release specific information on the victims, but estimated their ages ranged from around 20 to about 45. Fitzgerald said police patrolling the neighborhood at the time of the shooting heard gunshots and rushed to scene. Police officers administered first aid to the victims before paramedics arrived.

Fitzgerald said there were around 100 people in the building, which was packed “with a gathering of alleged urban motorcycle clubs.” According to the police chief, one of the exits inside the building had to be destroyed in order for people to get out.

Authorities are asking for the public’s help in solving the crime.

“What we know is that several hundred potential witness are out there that can provide information to what exactly transpired inside the location, how the gunfire erupted,” Fitzgerald said. “Our hope is that with this message is that we elicit the type of information that we need to bring these people to justice.”

Cedar Valley Crime Stoppers is offering a $2,500 reward for information leading to an arrest in the case.