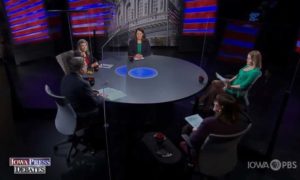 The candidates disagreed on taxes, immigration, infrastructure, the minimum wage and when the vacancy on the U.S. Supreme Court should be filled. Ernst, who described herself as “proudly pro-life,” downplayed the idea confirming President Trump’s nominee will get the ultimate result abortion opponents have long sought.

“I think the likelihood of Roe v Wade being overturned is very minimal,” Ernst said.

“I will always defend a woman’s right to make her own health care decisions with the guidance of her doctor,” Greenfield said. 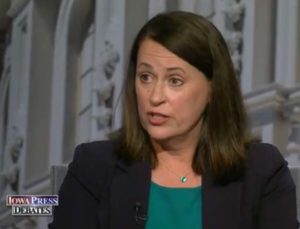 Tens of millions of dollars is being spent by outside groups on this Senate race and each candidate accused the other of being beholden to special interest money.

“Senator Ernst has taken $2 million in corporate PAC donations and folks, there’s too much money in our politics. I put a plan together. She doesn’t have one,” Greenfield said.

Ernst responded: “In one hand, she’s saying: ‘Oh, we’re not going to have dark money in this campaign.’ She’s got the other hand behind her saying: ‘Please hand me some dark money.'”

Neither candidate ruled out the idea of raising new fees to supplement the per-gallon gas tax, but their views of the federal minimum wage diverged. Ernst said it may be time to “index” the minimum wage, so it automatically goes up based on inflation.

“There are a lot of solutions out there,” Ernst said, “but overall I do believe that this should be a state-based issue as well.”

Due to the pandemic, the debate was held in an empty auditorium and the candidates were separated by Plexiglas. Ernst mentioned during the hour-long debate that she wears a face mask, but she said requiring face coverings in public doesn’t appear to be enforceable. Greenfield cited the recent increase in Covid cases and pointed to the White House Coronavirus Task Force recommendation that Iowa have a statewide mask mandate.