You are here: Home / News / Southeast Iowa’s congressional race among tightest in U.S. 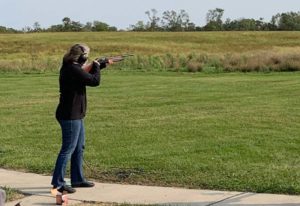 The race in Iowa’s second congressional district to replace retiring Democratic Congressman Dave Loebsack is considered one of the country’s most competitive.

Republican Mariannette Miller-Meeks of Ottumwa, an eye doctor, is making her fourth try for a seat in the U.S. House. On a recent Saturday morning, Miller-Meeks was at a Jasper County GOP fundraiser that featured a trap shooting competition. Miller-Meeks is not quite five foot tall and used a youth shotgun.

“It’s shorter. It has less of a kick,” Miller-Meeks said. “…This one’s easier for me to handle.”

Miller-Meeks told the crowd at the fundraiser that as one of eight kids, her parents scoffed at her dream of becoming a doctor.

“My rebellion was to leave home at 16, get a job, enroll in San Antonio Community College, enlist in the Army at age 18, work and go to school until I got a degree in nursing so I could work at night. Kept going to school, got a masters in education. Ultimately was able to…graduate from medical school, then I came in Iowa to do my residency,” Miller-Meeks said, to applause. “…And now I’m a state senator.”

Like other Republicans, Miller-Meeks has been actively campaigning since this spring, once businesses reopened after being closed due to the pandemic.

“I really missed being able to interact with people and just listening, being there, being attentive,” Miller-Meeks said. “…You can do that and be at a respectful distance.” 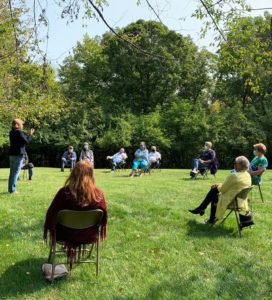 “I certainly don’t want to be in a situation where I’m regretting that we had a public event of any kind,” Hart said.

On September 19, Hart began holding “backyard talks” in the district. Her first was in Ottumwa, Hart stood in the middle of a dozen people spread out in a circle. Hart, a former teacher and one-term state senator, was the Iowa Democratic Party’s 2018 nominee for lieutenant governor. She told the group in Ottumwa about growing up as one of nine kids on a dairy farm.

“I tell people I had the great advantage growing up of being raised by a strong Democratic father and strong Republican mother and that was such an advantage in my life because I learned how to stand up for what I believe in,” Hart said, “but I also learned to listen to the other side.”

Barack Obama won Iowa’s second congressional district in 2008 and 2012. Donald Trump won the district in 2016. The latest voter registration data shows there are about 26,000 more Democrats than Republicans in the second district, which covers the southeast quadrant of the state.