You are here: Home / News / Ernst says Amy Coney Barrett will show ‘what a mom can do’ 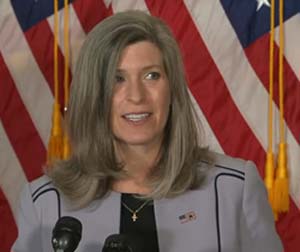 Iowa Senator Joni Ernst says President Trump’s nominee for a vacancy on the U.S. Supreme Court will be a role model for women and their daughters.

Ernst joined six other Republican Senators — all women — at a news conference in Washington, D.C. on Wednesday to talk about Barrett. Ernst has previously focused her public remarks on the Senate’s confirmation process. Yesterday, Ernst’s comments suggested Barrett’s advancement to the Supreme Court justice was imminent.

“This is what a mom can do. I tell my daughter that all the time,” Ernst said. “…A mom can be a combat veteran…A mom can serve in the United States Senate and, most certainly, a mom can be a supreme court justice.”

Ernst’s daughter, Libby, is a cadet at the U.S. Military Academy at West Point.  Barrett, who is currently a federal judge, is the mother of seven children. Ernst described Ginsburg as a trailblazer for working moms in her first public response to Ginsburg’s death and she returned to that theme in yesterday’s news conference,

“She broke so many barriers that women through all ages have faced whether it was her faith, whether it was that she was a working mother,” Ernst said, “and going on to serve on the Supreme Court.”