You are here: Home / News / Frost advisory out for parts of the state 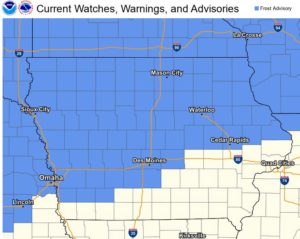 Forecasters say a cold front is moving over Iowa today in what may be the beginning of the end of warm weather for the season.

Meteorologist Craig Cogil, at the National Weather Service, says a frost advisory is now posted. “The frost advisory extends across the northwestern two-thirds to three-quarters of Iowa overnight tonight,” Cogil says. “We’re looking at temperatures dropping down into the low to mid-30s under clear skies and light winds, so we’re expecting frost in these locations.”

He notes there’s a difference between the frost we’re expecting tonight and a hard or “killing” freeze. “No, more the killing type of freeze that we see would be temperatures below 32 degrees,” Cogil says. “Right now, the temperatures overnight tonight are going to be around 32 in the north and in the mid 30s here in central Iowa.”

Iowans who have tender and flowering plants that they’d like to keep around a bit longer will need to set protections in place before nightfall.  “A lot of the vegetation can withstand this although certainly some of the more sensitive plants you’ll want to cover tonight,” he says, “even though the temperatures may not make it to freezing.”

The chill is expected to stick around most of Iowa at least through the weekend, with highs generally in the 50s and lows in the 30s and 40s.