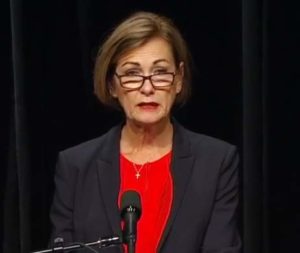 An advisory board Governor Reynolds assembled in mid-June is making 56 recommendations for jump-starting Iowa’s economic recovery from the pandemic.

The board’s top recommendation is for the state to take steps to make child care more affordable and accessible. The group ranks universal broadband access and increasing the supply of affordable housing as other top priorities. The board, which had its final meeting this morning, was led by Ben McLean, the CEO of Ruan Transportation Management Systems in Des Moines.

“As I look at the recommendations we’ve just approved here, when implemented…these recommendations will meet those ambitious goals that we set,” he said, “that idea of not being boxed in and starting from the ground up.”

Governor Kim Reynolds said the group’s report “will serve as the foundation” for her 2021 legislative agenda.

“Honestly, it’s hard to believe that your work could be even more critical than it was when you started in June, but on August 10 when the derecho hit so many of our counties across our state — wiping out homes and crops, businesses and infrastructure, I think that just simply added to the significance of the work that you’re doing,” Reynolds said.

Thirteen business executives served on the panel, which held its first meeting June 25.

“We all like ideas, but I think I speak for everyone on this board that the execution is more important to all of us,” Nick Bodesh, President and CEO of Elite Octane in Atlantic, said during today’s meeting. “If it’s on this list, we want to make it happen.”

The advisory board approved its list of recommendations today. Its final report will be drafted by the end of the month.