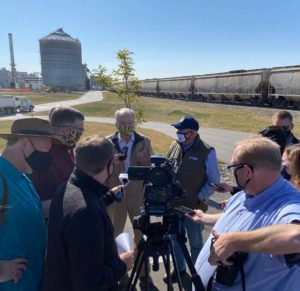 U.S. Agriculture Secretary Sonny Perdue today announced the U.S.D.A. has awarded $9.3 million in grants to increase ethanol and biodiesel sales in the state of Iowa.

The money may be used to install new storage tanks or new fuel pumps for biodiesel or higher blends of ethanol. “A consumer will have the ultimate choice. That’s what we want to do,” Perdue said. “…I’m confident that our wise consumers when they see a cleaner product, higher octane, lower price, that benefits their neighbors — I think they’re going to choose that.”

Perdue made an appearance at a Mason City ethanol plant today to announce the opening round of grants from a $100 million federal grant program he unveiled in May. The $22 million awarded today goes to retailers in Iowa and 13 other states.

“Many stations had hidden that E15 pump out in the back. It was kind of like putting tobacco in a cage, where you had to go find it or ask for it,” Perdue said. “Now, we’re taking those skulls and crossbones off those pumps, putting them out there with a single blended type of pump.”

A year ago, the Trump Administration moved to allow year-round sales of E15 nationwide, but most stations that offer an ethanol blend offer E10. In September, President Trump announced he had directed the EPA to let stations use current E10 pumps to sell E15. These USDA grants are for new tanks and pumps that dispense E15 or higher blends.

“This is the beginning of getting this kind of situation and availability across the country and if you go from 10 to 15, I’m not a math major, but that looks like that’s a 50% increase,” Perdue said, laughing.

“This is an election year ploy,” Smith said early this morning.

“Now he thinks he can buy us off,” Judge said. “…What we’re seeing today is too little and it’s too late.”

Perdue said the program was announced in May and it takes a while in the federal government to get grants awarded.

“It sounds like this may be sour grapes because they didn’t think of it,” Perdue told reporters in Mason City.