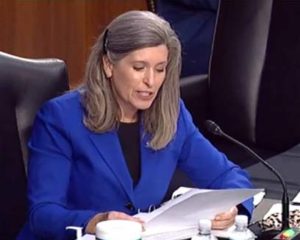 Barrett was part of a three-judge panel that cited the precedent set by another ruling and upheld a Chicago ordinance banning abortion protesters from approaching people entering an abortion clinic. Ernst, who began by calling herself and Barret “pro-life,” mentioned the case yesterday during Barrett’s Senate confirmation hearing.

“In that case, using precedent, it did favor that abortion clinic — is that correct?” Ernst asked and Barrett replied: “That is correct.”

Ernst read part of a letter from the Susan B. Anthony List, a group that opposes abortion.

“Now I know this is going to make a number of members on the committee just very squeamish,” Ernst said before quoting from the letter. “…’Judge Barrett has proven herself to handle disputes impartially…She is a jurist who rightly leaves politics to politicians and legislating to legislators.'”

Ernst also used her time during  Tuesday’s hearing to review her own complaints about how the Environmental Protection Agency has handled ethanol-related policies and to criticize Democrats over pandemic relief negotiations.