You are here: Home / Fires/Accidents/Disasters / State Patrol reminds drivers to not ‘veer for deer’ 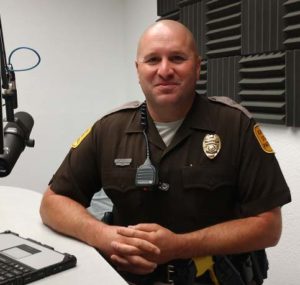 Car-deer collisions are climbing in Iowa as combines are running full tilt, scaring animals out of the fields and into the roadways.

A recent report ranked Iowa the seventh worst state in the U.S. for such crashes, with a one-in-58 chance of colliding with an animal. Iowa State Patrol Trooper Ryan DeVault, based in Council Bluffs, says motorists need to be especially alert during harvest season and follow the advice, “Don’t veer for deer.”

“There’s many accidents out there where people don’t live by that,” DeVault says, “and they swerve to miss a deer and the next thing you know, they’re upside down in a ditch, causing more harm to themselves and their vehicle than they would’ve if they’d just hit that deer.”

October, November and December are the worst months for animal collisions. DeVault says flashing your lights or honking your horn in hopes the deer will run the other way is not necessarily helpful in preventing a collision. “We all should have automobile insurance and there’s a reason,” DeVault says. “Nobody likes to be inconvenienced with their car being in the shop. It is a much safer avenue to just firmly apply the brakes and keep that steering wheel straight and more-or-less brace for impact if you see a deer coming.”

Farmers and grain haulers can help to prevent deer collisions by being careful corn isn’t spilled on roads. Motorcylists need to be watchful, too, as loose corn and soybeans can act like marbles, causing them to lose of control, especially on turns. Motorists also need to keep a sharp eye out for tractors, combines and other farm equipment, particularly since it’s getting dark so early now.

“When you’re seeing a lot of flashing amber lights and the white lights to the rear on some of this agricultural machinery doesn’t always tell you exactly where the edge of that piece of equipment is at,” DeVault says. “When you do go out to pass in a passing zone, especially after dark, pay attention.”

While farmers are supposed to only be using half the road with their big vehicles, they occasionally may hang over the center line, so be prepared, slow down and pass with care.