You are here: Home / News / Return of flights from Colorado celebrated at Sioux City airport 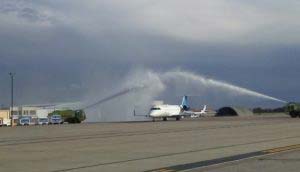 Sioux City again has daily air service to Colorado. The first flight from Denver arrived at Sioux Gateway Airport on Wednesday afternoon, rolling in under an arch of water sprayed by two airport fire trucks to welcome the United Express SkyWest plane.

Sioux City Mayor Bob Scott says he hopes travelers from both communities will support the new service. “I want to especially thank SkyWest Airlines for having the confidence in our market in these critical times that are difficult to imagine traveling,” Mayor Scott says. “This is one of those deals where we either use it or we lose it. It’s important that we fly out of Sioux City and it’s important that we use this airline.” 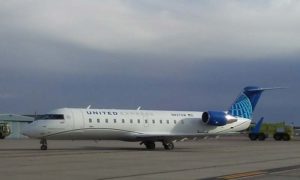 Dave Bernstein, president of the airport board of directors, says early indications are that the local support is there. “Our understanding is the booking numbers are good,” Bernstein says, “and I think folks are pleased, especially given the current environment.”

Thirty-six passengers arrived from Denver on the first flight. Twenty-six departed Sioux City about an hour later on the 50-passenger jet. American Airlines announced plans to end all flights to Sioux City earlier this year, but in August reversed course and said it would keep flying routes to Chicago and Dallas.