You are here: Home / News / Grassley and Ernst vote to advance Barrett nomination out of committee 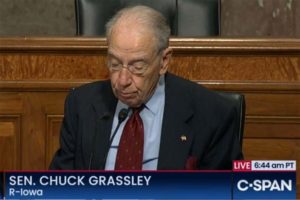 Shortly after eight o’clock this morning, Iowa Senators Chuck Grassley and Joni Ernst voted with other Republicans on the Senate Judiciary Committee to advance President Trump’s Supreme Court nominee for a vote in the full Senate. Grassley gave a short speech after the vote, saying Amy Coney Barrett’s would practice “judicial restraint.”

“She has the temperament and humility that we would expect of a judge,” Grassley said. “…Most importantly, she understands that a judge should interpret, not make the law.”

Grassley criticized Democrats on the committee for boycotting today’s vote.

“Our colleagues don’t think that they ought to represent their states and that’s what they’re not doing is representing their people when they don’t show up here,” Grassley said.

“They claimed her critique of Chief Justice Roberts’ reasoning in the 2012 ACA case dictates how she’d vote in the upcoming case and we all know that that’s bunk,” Grassley said. …She testified: ‘I have no hostility to the ACA.'”

Senator Ernst did not speak in committee, but gave a speech on the Senate floor yesterday about Barrett.

“Judge Amy Coney Barrett is a wise, experienced, compassionate and strong woman and this past week Iowans and all Americans had the chance to see that,” Ernst said. “No matter the question or the topic, she was calm, cool and collected.”

“What has become crystal clear to me throughout this process is that Judge Barrett’s academic and professional qualifications are above reproach,” Ernst said.

Ernst said her test for a Supreme Court justice is whether he or she will “defend the Constitution.”

“Far too often politicians in Washington want the Supreme Court to be a super legislature,” Ernst said, “to push policy that can’t make it through congress.”

Ernst, near the end of her six-minute speech, said the “soon-to-be-justice” should be viewed as a role model for all women.

“I’m struck by the irony of how demeaning to women some of the left’s accusations really are,” Ernst said, “that Judge Barrett, a working mother of seven with a strong record of professional and academic accomplishment, couldn’t possibly respect the goals and desires of today’s women.”

The Republican-led senate is scheduled to take its final vote on Monday to confirm Barrett as a Supreme Court justice.