You are here: Home / News / More snow and colder temperatures on the way 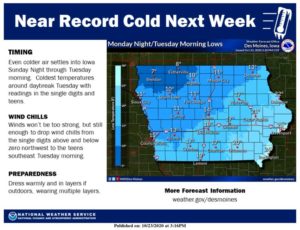 Don’t plan on putting away the heavy coat anytime soon.

National Weather Service Meteorologist Brad Small says the cold temperatures are going to get worse. “There’ll be some snow first. The weekend will start off dry — but snow will move into much of Iowa sometime on Sunday from northwest to southeast, Sunday to Sunday evening,” Small says.

He says they are predicting accumulations of one inch from central Iowa to the south — and then larger amounts moving to the north. “We could see amounts of three to four inches — something of that nature from Fort Doge north and west,” Small says. “A good chunk of the state will see some snow. It won’t be a heavy snow at any particular time — it’ll be light to moderate for an extended period. Still enough to get some snow on the ground — especially on the grass. There could be some melting during the day, Sunday, however by Sunday night we’ll see snow in most locations.”

The cold temperatures will follow. “After the snow ends we’re expecting near-record cold and even some records possible in some spots Monday and Tuesday,” Small says. “The coldest morning is Tuesday morning when we’ll see lows in the teens and single digits from Des Moines north and west, and low 20s towards Ottumwa.” Small says it’s just a matter of the cold weather pattern being stuck over the state.