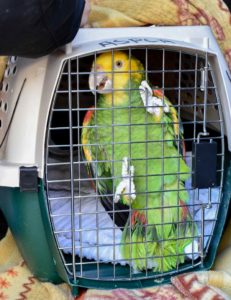 One of the birds taken from a Des Moines home.

All of the birds need medical attention. “They’re in really rough shape. One of the cockatoos’ beaks was so severely overgrown that it almost came clear around and touched her breast. That is something that is extremely problematic for exotic birds — because you can’t really eat properly,” according to Stafford. “Another bird’s nails were so long they curled completely into a circle. again making it difficult for her to grip anything — whether that be food or to perch properly.” He says another bird has plucked some of its feathers — which is an indication they had not gotten proper care in some time. 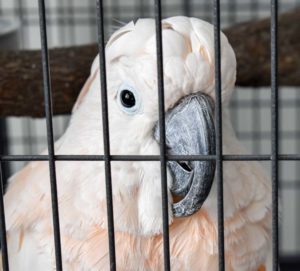 Stafford believes the birds can recover with the proper care. “Certainly we are hopeful. I mean we always have a guarded prognosis with these birds. They are going to require very intensive care — and probably some specialty care… we may have to have some specialists come in that deal with these things a on a more deep level, have a lot more experience,” Stafford says. Stafford says some of the birds are expensive to buy and it can be expensive to take care of them properly.

He says the ARL is working with Des Moines police on getting the birds permanently taken away from the owner.
“Both sides are given an opportunity of course to share their perspective on that. Those proceedings I can tell you have been started,” Stafford says, “and we’ll see where that goes. Whether the owner wants to be cooperative and realizes she was in over her head and maybe wasn’t providing the best care, she can choose to relinquish them — and if not — we’ll go to court.”

The name of the owner of the birds has not been released.