You are here: Home / News / Ernst predicts a good outcome on Tuesday night 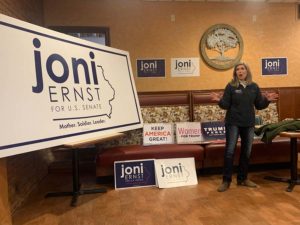 Incumbent Republican Senator Joni Ernst — locked in a tight battle with Democratic challenger Theresa Greenfield – kicked off her final push to reach voters with a rally on her home turf in Red Oak.

“My gut is saying really good things about this election cycle here in Iowa,” Ernst said. “It’s been a rough haul, no doubt about it…but I feel good and I’m asking for their support for the next six years.”

Ernst attended, but did not speak at President Trump’s rally Tuesday night in Omaha. Ernst said the thousands there — and at other GOP events this fall — show her Republicans are energized about the election.

“They’re masked up, they’re enthusiastic,” Ernst said. “They know that it’s different with Covid, but they’re still coming out and being supportive and that’s what I’ve felt all across the state of Iowa, which tells me we’re going to have a good outcome Tuesday evening.” 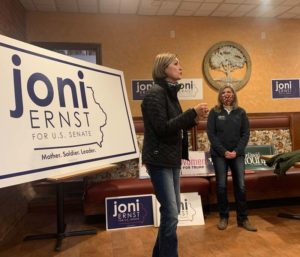 Ernst will join Vice President Mike Pence at his rally in Des Moines early this afternoon.

Ernst’s challenger Theresa Greenfield suspended her own RV tour yesterday after some of her campaign staff were around a person who later tested positive for Covid.

Greenfield is regularly tested and recently tested negative, according to her campaign spokesman, but has taken a test again to be safe. A campaign spokesperson said there were no results to share late Wednesday evening.