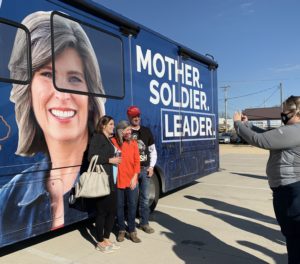 Incumbent Republican Joni Ernst has been campaigning in northwest Iowa today as part of her final push to win a second term in the U.S. Senate. During a stop in Sioux City, Ernst criticized her Democratic opponent Theresa Greenfield for not visiting each of Iowa’s 99 counties.

“Can you believe that?” Ernst asked and the crowd booed. “The Iowa people expect their elected representatives to show up and do their job.”

Ernst had a team of supporters, including two of her fellow senators. Texas Senator Ted Cruz told the crowd jammed into Woodbury County GOP headquarters that Ernst’s race will determine whether Republicans retain majority control of the U.S. Senate.

Iowa Senator Chuck Grassley held up a bottle of hand sanitizer and told the crowd he was there to clean up some lies, like the claim in an ad that Ernst had voted four times to give herself a pay raise.

Cruz, the winner of Iowa’s presidential caucuses in 2016, told the crowd Iowa is playing a pivotal role in the national election this year.

Governor Kim Reynolds, who is also on the tour, joked that Cruz “would be in trouble” once she got coffee after the first bus tour stop. Cruz opposes the federal ethanol production mandate, but none of the other Republicans at the event brought that up.