You are here: Home / News / Candidates on the Iowa campaign trail on final weekend of 2020 campaign

The countdown clock for the 2020 election has shifted from days to hours.

President Trump spoke in Dubuque Sunday afternoon. “What a crowd,” Trump said, to cheers as he took the stage. “We had a great victory here four years ago.”

Minnesota Senator Amy Klobuchar campaigned with Democrats in Marion on Saturday. “All eyes are on Iowa right now in the country. They are!” she said.

The outcome of Iowa’s U.S. Senate race may determine which party holds a majority in the Senate next year. Incumbent Republican Joni Ernst and her campaign bus rolled into Maquoketa early Saturday afternoon.

“We are seeing a level of enthusiasm and energy all across the state of Iowa. It’s not doom and gloom. It’s not the dark winter some might want you to believe…We know that there is a brighter future ahead,” Ernst said, to cheers. 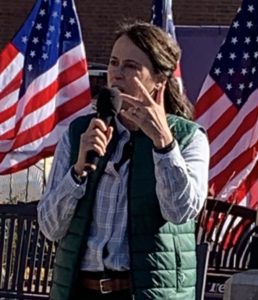 Democratic challenger Theresa Greenfield told the crowd in Marion it’s a “tough race…but I’ll tell you what — it’s a race we can win.”

Greenfield’s closing pitch this weekend focused on issues like Social Security’s solvency and health care. “Another thing that people tell me about everywhere I go is they want the divisiveness to end. They want the bickering and the name-calling to end, yeah. I do, too. It’s part of why I’m in this race. I’ll work with anyone if they’ve got a good idea to help our country to move forward.”

“This has been a long, long journey obviously,” Ernst said. “But no matter the outcome, I know this is in God’s hands and I’ve loved traveling the state of Iowa, so on to victory,” Ernst said.

Greenfield told Radio Iowa by the end of the weekend, her campaign will have made two million voter contacts by via text or direct phone conversations.

“We are fired up, honestly. People are voting,” Greenfield said. “They’re talking to their neighbors and friends, so I know it’s going to be a competitive race.”

According to the Secretary of State’s website, nearly 925,000 Iowans had already voted by Saturday.