You are here: Home / Weather / October will go down in the books as one of Iowa’s coldest ever 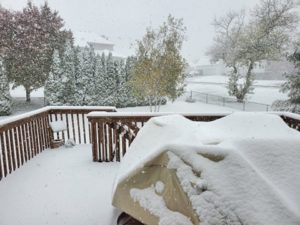 Radio Iowa listener Mike Tenney shared this photo from his back deck in Johnston following the “snow squall” October 19th.

Iowans don’t usually see a half-foot of snowfall during October but that’s just one more thing we can chalk up for this bizarre 2020.

State climatologist Justin Glisan says the month ended up being one of the coldest Octobers in Iowa history, punctuated by that snow squall mid-month that dumped heavy snow mostly in central Iowa, with some areas like Johnston reporting up to nine inches. It made for a chilly month.

“The average temperature across the state was about 46 degrees and that’s about five degrees below average,” Glisan says. “We did have periods in which we had warmer-than-average temperatures, but more of those days were below average. If we look at rankings, this will be one of the Top Ten coolest Octobers that we’ve had on record.”

Rainfall during October was a mixed bag, as parts of western and central Iowa were still deep in drought or had very dry conditions, while eastern Iowa got more than its share of precipitation.

“We were averaging about two inches statewide, and that’s about 6/10ths of an inch below average,” Glisan says. “Eastern Iowa saw some higher-than-normal totals, but generally across the state, one to two inches below average, which, we are getting into the drier part of year.”

So what does the month of November hold? Some forecasters are predicting a “snowmageddon,” but Glisan sees a more gradual move toward an early winter.

“What we’re seeing is a transition from warmer-than-average temperatures, which we’ll see this week — highs in the 60s and some 70s possible, towards colder-than-average chances towards the middle of the month,” he says.

Forecast models indicate November may be a wetter-than-average month, which he says could be a big plus to “recharge” the soil in areas of Iowa that have been so dry for much of the year.