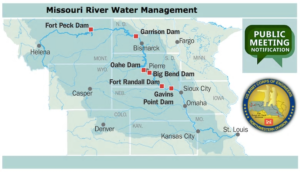 The U.S. Army Corps of Engineers is hosting meetings this (Monday) afternoon and evening to discuss managing the Missouri River and the federal reservoirs that feed into it. John Remus, chief of the Missouri River Water Management Division, says 2020 has been an unusual year.

“We began the year with wetter than average conditions in the basin,” Remus says. “However, as many of you know, the basin dried up and dried up quickly.”

The Corps has shifted from evacuating excess flood water from 2019 to managing the system to meet what Remus calls “flow targets” for the river. Each second, about 30,000 cubic feet of water is being released from the Gavins Point Dam near Yankton, South Dakota, today. Remus says that volume will drop in early December when the navigation season ends on the Missouri River. He expects lower flows out of that dam through the winter because the area to the north is in drought.

“That is what the system is designed to do,” Remus says.

The first public meeting about the Corps’ Missouri River management is at 1:30 p.m. today and the other starts at 6 p.m. Both are virtual or online meetings and questions may be submitted in advance. Find more information about the meetings here.